As companies and organizations across the world face unprecedented challenges with the COVID-19 pandemic, the full economic impact remains unclear. While nonprofits providing medical and relief aid may see an increase in fundraising revenue in the short term, uncertainty remains around how it will affect the nonprofit sector on the whole in the longer term. What we can do, is look to recent economic downturns to begin to prepare for the potential impact of market decline.

Looking back to past recession years, studies indicate that the generosity of Americans has persevered and stayed fairly consistent despite the obstacles faced.

For example, the 2008 recession saw overall giving in America decrease by 3.7%. The majority of this decline in giving was attributed to a decline in contributions among wealthy Americans. As reported by the New York Times, from 2006 to 2014 “the share of income donated to charity by Americans who earned $200,000 or more decreased by 4.6%.”

However, we do anticipate a decline in revenue if there is a large economic shift and our experience indicates that organizations that aren’t prepared face a much larger, and longer-lasting impact than those that are.

What THD saw with the 2008 recession was the biggest loss in revenue for organizations was due to three major factors: decreasing or eliminating acquisition marketing investment, a decline in acquisition performance, and an increase in attrition.

Organizations that chose to cut spending drastically in response to the downturn saw substantially longer recovery periods in subsequent years. Our data indicates that on average, for every year of expenditures cut, it takes at least three years to recover – and even longer to experience growth. We also saw that, across the board, acquisition suffered and retention rates dropped in the year after the crash.

Data suggests that even with economic downturn, consumer confidence is a lagging indicator. The majority of Americans don’t feel economic changes until much later, sometimes even after the economy starts to pick back up. In 2009, giving decreased by 8.3% — showing more of a decline in the year after the recession officially occurred. 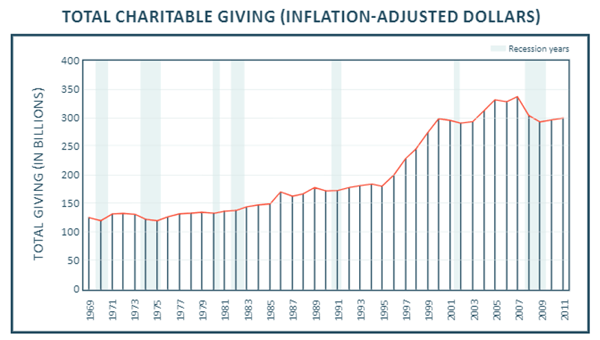 One large nonprofit organization in the disease and disease research space saw the following revenue trends during and after the 2008 recession: 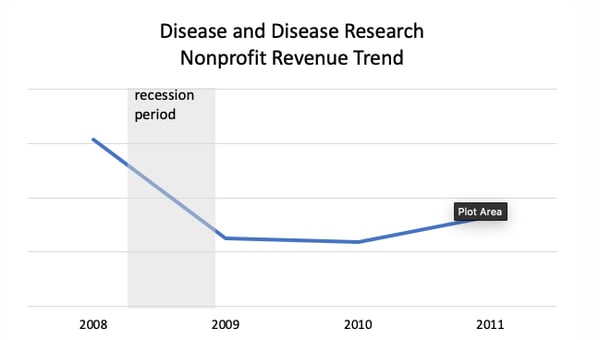 Overall the total revenue declined 18.6% over the course of 2 years.

Weathering the storm will make the rebound quicker and easier. In the event of a recession, our recommendation is to make small cuts to marginal sources only if net revenue has to be improved to offset other anticipated shortfalls.

Take advantage of the lag

Since the full impact of an economic downturn is not seen right away, take advantage of the lag time by continuing to focus on providing donors with a strong and consistent experience.

Prioritize quality over quantity. Your active donor pool is sacred and is by far the biggest contributor to your bottom line. This is the time to prioritize efforts to improve donor retention and lifetime value.

Conversely, acquiring net new donors will become more challenging as time progresses. Focus on narrowing your prospecting net to a smaller, more qualified pool of prospects. A wide net will deplete ad spending and will ultimately make converting and retaining even more difficult.

Keep the focus on fundraising

Your focus on fundraising shouldn’t change but the perception of it might. Instead of focusing on the amount at which a donor gives, increase focus on the frequency. Overall, donor loyalty will prove most valuable over a multi-year trend.

Be ready to pivot available funds

Right now, the majority of local marketing events and fundraising events are being cancelled. If you have to cancel an event, we recommend pivoting to your digital channels. With social-distancing mandates in place due to coronavirus, digital social networking and e-commerce will only become more prevalent. By investing more into digital channels, you can stay in front of your key audiences where they are online.

Forging ahead with your fundraising efforts with no acknowledgement of the current environment can seem insensitive. Determine how this situation intersects with your mission and deploy messaging to donors that is empathetic and helpful, while still supporting your need for funds.